This Swallow became none airworthy due to mainframe failure [glue and wood] Owners Harry and Ruth Kindon could not bear to dispose of her, so contacted Vintage Kiwi for support. It was decided to have Joe Himmel of Auckland, tidy her up complete with a repaint for display at the Classic Flyers Museum at Tauranga. It represents the colour scheme of that time, but is not the original colours.

Joe Himmel [Vintage Kiwi member] in fact built this Swallow from a kitset supplied by Slingsby Sailplanes for the Southland Gliding Club. Work started 1959 and was completed in 1961 when it was test flown. As with all these things a large enthusiastic group started on the construction, but quickly dwindled down to Joe and a couple of helpers. Joe at that time owned a boat building business and it was constructed at his boat yard. After some years flying the aircraft had a smack up in a contest, which required a new fuse to be rebuilt. So another fuse only kit was ordered and duly built and fitted to the rest of the aircraft that survived, and it was flying again.

The last previous owners Harry and Ruth Kindon have gifted this glider to Vintage Kiwi. This glider is now on display at Classic Fliers Tauranga, New Zealand. See lower photo on right, CD can be seen hanging from the ceiling. 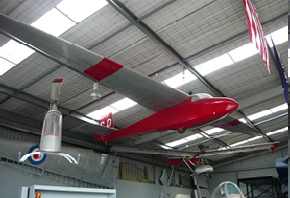